Skip to content
Various internet trolls will argue, quite violently, that A=432 Hz is a dirty, stinking lie – and that there is no historical record of it ever being… bla, bla, bla.
While we agree that A is not the foundation of resonance (B-flat is), the “A” note, nevertheless, at 432 Hz is the correct frequency – and there is at least one documentation of this which survives to this day.
Gioseffo Zarlino (31 January or 22 March 1517 – 4 February 1590) was the leading music theorist, based in Venice – which was the most powerful European city-state at the time.  One day, at an exhibition of Venetian art in Portland, Oregon – they just happened to be displaying his book Le Istitutioni_Harmoniche, opened to page 104: … which handily lists a bunch of frequencies.
If we take a look at those frequencies and compare them to the frequencies we generated as harmonics from the “magic” frequencies of 5.4 Hz and 7.2 Hz – which I have documented on the home page as exhibiting a strange non-beating effect against a background noise of infrasound which we would otherwise be unaware of – we see a surprising amount of alignment to Zarlino’s scale frequencies from 500 years ago and the frequencies we have generated and found to exhibit a resonance with nature, using modern technology. 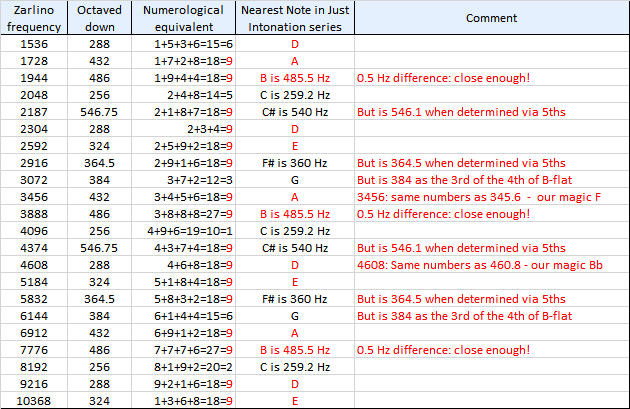 I’m not going to argue with Zarlino on the correct way to determine the harmonic frequencies – what is significant here is that we came up with a bunch of musical frequencies based on a chance encounter with vibration in a Johannesburg hotel room – and those frequencies, one way or another, also match what Zarlino recorded in his book published in 1558.

How is this possible?  Well, first of all, Zarlino was an early advocate in Western culture for Just Intonation.  Secondly, he must have started with the same frequencies as I did in order to calculate his just, harmonic series; either that, or the frequencies were passed down to him from some earlier culture.  I will have to read his book in old Italian to find out.

Just another confirmation from history that we are on the right track with these frequencies – and good to point out to the internet trolls (professional or otherwise) that arguing that something is “wrong” because it contradicts received knowledge that you’ve never bothered to question, is illogical and lazy. In other words, you can’t prove that something doesn’t exist just because you haven’t bothered to find the evidence of it. We have, and it does!